Right now, it’s a 20-foot shipping container, a small start-up company, a tornado in a small tube, and a really good idea.

WSU researchers and students have started fundraising and are looking for help to build the first hydrogen gas station in Washington. They hope to use their gas station to demonstrate an inexpensive, portable way to liquefy hydrogen – which is considered the key to unlocking the clean hydrogen economy.

“What we’re doing is unique,” said Jake Leachman, associate professor in the WSU School of Mechanical and Materials Engineering. “There isn’t a precedent for it.”

Good for the Earth

Increasing the number of hydrogen fuel-powered cars on the road could help reduce harmful carbon dioxide emissions that are changing the earth’s climate. Unlike gasoline powered cars, which produce carbon dioxide, the only waste product of hydrogen fuel cell-powered cars is water. Hydrogen-powered vehicles also have a comparable range of about 300 miles to gasoline-powered cars. Some car makers, including Toyota, Honda, and Hyundai, have recently begun selling the cars in California.

One of the biggest stumbling blocks to harnessing hydrogen energy, however, has been a lack of nationwide infrastructure. There are only eight hydrogen liquefactions plants in North America, so liquid hydrogen has to be transported over long distances, which is expensive.

At the same time, hydrogen gas is ubiquitous.

“There are systems that can convert wind energy to hydrogen, but it’s still difficult to increase the hydrogen density for transport and storage,” said Leachman. 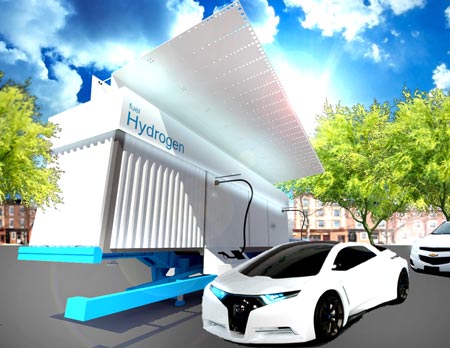 Two years ago, a group of WSU students designed a plan for an innovative and economical fueling station that took first place in an international hydrogen design competition. Their liquefaction technology could allow hydrogen generated from energy conversion, including from agriculture waste in wheat production, to be inexpensively gathered and stored, he said.

Last year, the researchers were part of a team to receive funding from the U.S. Department of Energy to develop their system, and they also formed a start-up company that specializes in hydrogen dispensing, liquefaction, and storage.

The researchers have developed a unique and efficient way to cool and liquefy hydrogen, using an old technology called a vortex tube. The vortex tube, a mechanical device that separates a compressed gas into hot and cold streams, was designed in the 1930s and is inexpensive and easy to make, but the WSU team was the first to connect it to hydrogen liquefaction.

WSU researchers and students have started fundraising and are looking for help to build the first hydrogen gas station in Washington. Learn more about the project on their website.

The group has received support from the Washington Research Foundation, the M.J. Murdock Charitable Trust, as well as from companies and individuals. The team is working to raise money to purchase needed equipment for their project, such as a Stirling pre-cooler, a hydrogen compressor, an electrolyzer, and a dispensing interface for the fueling station. The project has involved more than 100 students so far.

In addition to addressing one of the biggest challenges for the clean energy economy, the project is providing training for students in hydrogen systems that is unique in the U.S., says Leachman.