Alum Provides Students With Solar Arrays – And A Chance To Learn 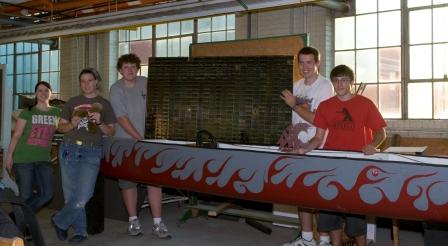 “When I was a student, getting anything donated (to our student club) was difficult at best. I know how hard it is – working with scraps.”

So, when Peter Wiseman (BS Mechanical Engineering, ’03; MS, ’05) saw the large, hand-built solar arrays lying in a corner and collecting dust at Lockheed-Martin, he had a crazy idea – why not give them to Washington State University’s Solar Splash club.

Lockheed-Martin engineers often find uses for spare parts, but the finely-crafted solar arrays were a stumper. They had been hand-built for a client for an expensive satellite and then not utilized. They had sat in a corner for four or five years.

Wiseman, who works at Lockheed-Martin as a quality engineer for the commercial space systems branch of the company, fondly recalls his time participating in the WSU student chapter of American Institute of Aeronautics and Astronautics (AIAA). There, he says, he learned skills that have proven to be invaluable in the workplace, such as teamwork, budgeting, organization, and time management. He also remembers working really hard with a tiny budget to get badly needed supplies.

Every year when he was at WSU, about five or six students participated in the AIAA club. The students developed camaraderie as they worked to overcome a range of challenges, from fundraising to design to logistics. One year, the group worked for countless hours making cribbage boards for a fundraising effort. They came away with about $1,000.

“You had to pull your weight, or it wasn’t going to work,” he says.

There was the first year of the club, when they flew their plane for the first time a week before the competition, only to have it crash into a million pieces in front of their eyes. They managed to re-build and still compete. Over several years, the group steadily improved their plane, eventually achieving a third-place finish.

Winning or losing was not the point, however, says Wiseman. Rather, the club provided an opportunity for growth.

“Club activities allowed me to apply skills that I was learning in class,” he says. “It was seat-of-the-pants figuring things out.”

At the beginning of each year, students generally worked a few hours a week on their project. The workload steadily grew, and by the end of the spring, students spent frantic last hours adjusting problems, putting the final plane together, and conducting last-minute tests. Finally, they would go to competition.

“Your heart is in your mouth. Everything could be gone in an instant,” says Wiseman. “It was not fun at times, but the amount of growth – you couldn’t get that in the classroom. It was a free-rein opportunity to succeed with your own innovation and effort.”

In his position at Lockheed-Martin, Wiseman works to put together commercial satellites for launch into outer space. A company several years ago had ordered three satellites but then decided they didn’t want the third satellite. Many of the other satellite parts found other purposes, but the engineers were unable to find a way to re-use the solar arrays.

Noticing the dusty solar cells, Wiseman finally asked the director of building operations whether WSU could have the arrays and asked him to fill out the paperwork to make it happen. Giving away the expensive solar arrays wasn’t easy. Getting the paperwork put together took a year of persistence and friendly prodding.

“I just asked a few favors and got it off the floor,” he says.

Wiseman contacted his sister, Lindsay Wiseman (BS, ME, ’08), who had followed her brother in becoming active in the AIAA club. She put him in touch with Andy Wekin (BS, ME, ’08), who was president of WSU’s Solar Splash club. The group participates in an international, solar-electric boat competition each summer in boats that they design and build. The group had been using some ancient solar arrays that had never worked very well in the first place. Over the years, wires had been broken. The student group was limping along.

Trying to ship the arrays proved tricky. Running out of time before last year’s competition, the students drove down to California in early June to pick them up, quickly assembling them before the event.

As the students headed off to their competition, they didn’t have a firm understanding of the workings of the solar arrays and how to best take advantage of them, but they quickly noticed how good they were, says Bryan Minor, president of Solar Splash and a senior in electrical engineering. After completing a two-hour endurance race and running down their batteries to nothing, the team got off the lake. Hooking up the new solar arrays to their batteries, they noticed that the batteries were re-charged almost immediately – unlike everyone else’s.

The gift provides a great opportunity for the club, says Minor, and the students hope to take advantage of it at this summer’s competition. The students are looking forward to pushing their boat harder and having more energy available.

“We have a lot of potential in the years ahead,” he says.

The gift means that Lockheed-Martin will receive Laureate status from the WSU Foundation. Wiseman hopes that his crazy idea might spur other WSU engineering and architecture alumni to look around their labs, shop floors, and warehouses for good equipment that could be put to use by WSU Voiland College researchers or student clubs. Equipment or supplies that are taking up space and gathering dust might be as good as gold as the Lockheed-Martin solar arrays were to the WSU Solar Splash team.

“These arrays are fantastic – they’re better than anything you can buy, and they were just taking up space in the clean room,” said Wiseman. “I’m thrilled that it worked out.”