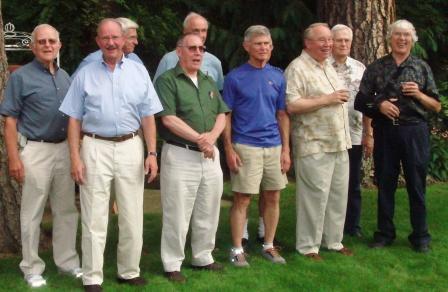 Year after year, the close friends from WSU’s architectural engineering class of 1958 met for reunions, sharing memories but also watching each other succeed in their architecture and engineering careers.

They gradually came to realize that much of their success came from the education that they all received at Washington State University, says Richal Smith, who received degrees in both architecture engineering and in civil engineering that year.

With an increasing realization about the gift that they had received, the class of ’58 came together to start a scholarship endowment.

“We realized how fortunate we were and that we needed to show our appreciation. Since we received so much, we feel an obligation,” says Smith. “It’s about giving back.”

There were a total of 15 students in the entire architecture engineering program.

In those days, “nothing happened in Pullman,” remembers Smith. Students almost never went out to dinner but often had coffee together. In the evening, they sometimes had social nights. There might be a dance, but everything was over by 10 p.m.

“There was a lot less going on,” he remembers.

“There was not a lot of play time,” agrees MerchDeGrasse, a fellow student. The stude nts might attend football games, a fraternity event, or an occasional dance.

“It was all school and not much else,” he says.

While the social life might be considered dull, the group became close friends and learned the valuable skills that would carry them through their careers.

“I wasn’t a good student in high school,” says DeGrasse. “In the architecture program, I learned how to be a student. It was a wonderful experience.”

The students spent several days a week together in design courses, and they worked long hours together on projects. “We were there virtually every spare hour,” says DeGrasse. “We became very well acquainted and good friends.”

Course work in architecture included a heavy emphasis on engineering. The architecture students took engineering and physics classes, and some of the students, in fact, became structural engineers.

“We basically received the same education as the engineers,” said DeGrasse.

“We had very good instructors – all professors who took a real interest in us,” remembers Smith. “We became friends in the process of getting a great education.”

After graduating, members of the class of 1958 all went on to successful careers, scattered around the Northwest and the country. Some joined the military. “It became apparent that with our knowledge of architecture engineering, we could do well in a lot of things,” says Smith.

The group started gathering every year for a reunion. Their friendships grew stronger as did their appreciation of their WSU education. When they gathered for their 50th reunion and returned to WSU, they decided that they wanted to provide to others an opportunity like they had received.

“The idea of funding a scholarship collectively reflects the strength of our friendship,” says Smith. “This is a story of opportunity, of friendship, of appreciation, and a desire for others to have the same opportunities that we had.”

Members of the class of ’58 have each been donating for several years to the scholarship fund and are close to having a large enough endowment to begin awarding scholarship funds.

Scholarships can make a significant difference for students who are struggling financially. Those who receive scholarships, even small ones, are much more likely to go on to graduate, says Smith. “It might seem like a small amount in the overall cost of college, but it’s often enough to tip the scales,” he says.

Providing scholarships makes a huge difference for students, agrees Greg Kessler, director of the School of Architecture and Construction Management.

“Escalating college costs make scholarships more important than ever,” he says. “The support we have received from the class of 1958 has been tremendous, and I look forward to seeing the impact that they have on many of the future students in this school.”

The Class of ’58 Scholarship is part of The Campaign for WSU. Since July 2006, the Campaign has raised $504.4 million toward a goal of $1 billion to increase support for WSU’s students, faculty, research, and programs and to leverage the university’s impact across the state, nation, and world.

For more information on how to provide support for scholarships, contact Bridget Pilcher, associate director of advancement, pilcher@wsu.edu, 509-335-0144.