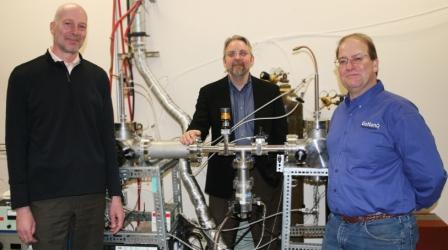 Want to meet the “Green Economy”? See the way that an economy grows out of education and innovation from university researchers? Solve global climate change while creating well-paying jobs?

Ok, it hasn’t happened quite yet. But, GoNano Technologies, Inc. is a small company with big ideas that is working to do all of the above.

The seeds of the company came out of research conducted by researchers Grant Norton, associate dean of research and graduate programs in the Voiland College of Engineering and Architecture at WSU, and David McIlroy, a physics professor at University of Idaho.

Actually, the beginning of the company really came out of a happy accident. The researchers were trying to build nanowires several years ago and instead accidently created a Nanospring™. The researchers soon determined that Nanosprings, unique, coiled nanostructures that are more than 5,000 times smaller than the width of a human hair, have valuable properties, the most important of which is that they create an extremely high surface area. The researchers received a W.M. Keck Foundation grant in 2004 to study the properties of the tiny structures.

The researchers eventually determined that compared to other nanomaterials, Nanosprings are pretty “cool.” They can be processed at a relatively cool 350 degrees Celsius, meaning that they can be processed onto multiple substrates – glass, steel, stainless steel or aluminum – with relative ease. At the same time, the surface area of the Nanosprings is highly accessible, making them very useable with a number of materials.

Eventually, the researchers began getting patents for their technologies and in fall of 2007, established GoNano, opening an office in Moscow, Idaho. The company now has eight employees, and the researchers are focused on scalability, cost reduction and application development.

So could Nanosprings solve global warming?

So how could tiny springs help to address climate change, which is possibly the biggest environmental and human challenge of the 21st century?

One of the big challenges of climate change is that through our economic activity, humans burn fossil fuels and emit gigatons of carbon dioxide every year. Carbon dioxide traps heat in our atmosphere, acting as an increasingly thicker blanket in our atmosphere. Scientists have determined that our very necessary human activities are contributing to the warming of the climate.

The researchers recently began looking at applying their Nanosprings to a process that uses titanium dioxide to catalyze carbon dioxide with the help of sunlight. When it is catalyzed, the carbon dioxide is converted to a number of useful and valued products, including formaldehyde, formic acid, methane, and methanol. These products can be used as chemical feed stocks for plastics or for natural gas production. While the process has been understood since the 1970’s, researchers have only been able to demonstrate a maximum conversion rate of eight percent, making the process economically unviable.

With its large and highly accessible surface area, however, researchers at GoNano have been able to demonstrate a conversion efficiency rate at more than 30 percent, 400 percent more efficient than their closest competitor. The researchers are helping the catalyst to work better than it ever did before, says Kinkeade, and they see the Nanospring technology as a way to mitigate CO2 emissions for industries such as the coal industry.

“The process,” says Kinkeade, “turns CO2 into a commodity rather than a waste product.”

The researchers have a prototype at the laboratory scale, and they are beginning to test their process at the University of Idaho wood-burning plan this month.

In the meantime, the researchers are working to use their Nanosprings to develop better and less expensive catalytic converters for automobiles.

In the next few months, GoNano researchers are developing a production facility to produce catalytic converters and carbon capture and recycling panels. So far, they have scaled up production of their processes by 1000 percent.

“This is the green economy,” says Kinkeade. “We believe that through the creation of this production facility, we can create many high-paying, sustainable jobs in the Palouse region.”

From the University to Innovative New Technologies

GoNano and all of its future potential is innovation that grew out of the hotbed of university research, says Kinkeade. On the practical side, the association has allowed the company to develop and maintain service center agreements with the universities, allowing the company access to university facilities that would otherwise be cost prohibitive for a start up.

More importantly, though, has been the access to brain power that comes from being tied to both universities.

“The most critical component of our association with Washington State University is that it has allowed us access to a highly trained pool of technical talent,” he says.