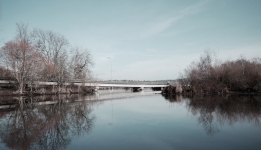 The SR-520 Bridge in Seattle that will be reconstructed by 2014.

A park on the water. Floating urban wetlands.

Could this someday be the future for pieces of the old SR-520 floating bridge?

More than 100 teams and individuals from a total of twenty countries entered WSU architecture graduate student Sara Strouse’s Rethink Reuse competition in August of 2012. The competition encouraged entrants to use the materials from Seattle’s old SR-520 floating bridge to create a new piece of architecture – either where the existing bridge is or in another location. The bridge is set to be reconstructed by 2014.

The nine competition winners were announced in September, and the first place team, David Dahl and Nicole Lew, received $3,000. The young Seattle professionals called their design South Park Food Bridge, a community-centered landscape. They proposed to reuse the 520 Bridge pontoons to create parks and floating urban wetlands that can host wildlife and grow healthy food.

One of the jury panel members, Ellen Snood, said the entry won because, “It was incredibly thoughtful and went to a deeper level than most other submittals. Also, this one really addressed social concerns in a way that was very uplifiting.” 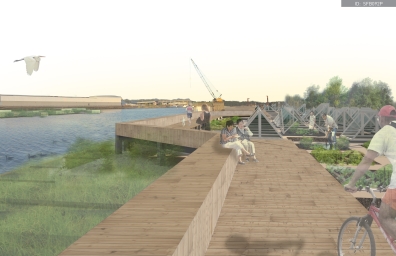 Winning entries included first through third place, best student entry and five honorable mentions that were displayed at the Seattle AIA gallery in conjunction with this fall’s Design Festival. One of the honorable mention awards went to a team of recent WSU graduates.

The competition aimed to raise awareness about sustainability and reusing existing infrastructure, even at the large scale, rather than demolishing it.

“Infrastructure is of big interest in the US right now, and encouraging the reuse of an existing structure versus demolition contributes to sustainability measures that are becoming more and more critical,” said Paul Hirzel, a faculty member in the School of Design and Construction and chair of Strouse’s graduate committee.

Other designs submitted by architecture students and professionals included eco-friendly residential and office space, a community for the unemployed and a cemetery.

The competition was part of Strouse’s graduate thesis project, the other half of which includes research about competitions and their use in the architecture field.

“I really wanted to get people thinking about the possibilities that are out there, and I think I have,” Strouse said.

See the first place design and other finalists.