We see these names in the headlines, and the news is almost always bad. In our minds, we see pock-marked walls, soldiers in khakis and dusty streets.

Rarely do any of us think of the region’s architecture, including the intricately decorated archways, inner courtyards, traditional mud brick walls or narrow streets. Why would we? 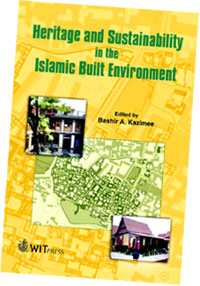 For Bashir Kazimee, professor in the Washington State University School of Design and Construction, saving the architectural heritage of these historic Islamic cities is critical to helping the region.

Kazimee recently published “Heritage and Sustainability in the Islamic Built Environment.” The essays in the book include up-to-date research and investigation of the heritage of Islamic built environments and analysis of the challenges these cities face as they confront globalization and development, he said.

Kazimee fled Afghanistan in 1981. As a young man, he studied at MIT in Boston and returned to Kabul in 1977, where he was a professor at Kabul University. Two years after he returned, the Russians invaded his country.

His American education and position as a professor made him a target, and the family had to flee. They later received asylum in the United States. After taking positions at several universities, he settled at WSU in 1990.
In the early years, he and his family always planned on returning to their homeland: “I believed I would go back,” Kazimee said.

But the situation just got worse.

Kazimee remained active and interested in issues in the region, although his research was always conducted from a distance. He wrote articles and books, attended conferences and served as a scholar on an international advisory board. Two years ago, an editor asked him to put together a book on heritage and sustainability in the Islamic world.

In summer 2011, Kazimee was invited to return to Kabul as a visiting scholar by the Agh Khan Trust for Culture foundation to discuss historic conservation at Kabul University.
“The first time I stepped out of the airport, I was very emotional,” he said after 30 years in exile.
The first thing he recognized was the smell. With a lot of pollution and open sewage, the city’s odor is not pleasant.
“It’s chaotic and unhealthy,” Kazimee said. “But, in fact, it reminded me so nostalgically of home.”

He felt a great connection to the people, who have suffered through 30 years of war and hardship. The scale of the challenges – including families trying to support their children, a lack of jobs and out-of-reach food prices – are unfathomable to Americans. The experience, he said, was shocking.

In 30 years, the population has grown from 400,000 to 4 million people. Seventy percent of the city is made up of squatter settlements.
“It was so changed, I couldn’t recognize the city,” Kazimee said.
And still the people somehow survive. He wanted to talk with everyone he met.
“When you look at their faces, it’s totally poetic,” he said. “It’s as if they don’t have any problems. I call them heroes. They must be geniuses to run their lives.”

The importance of architecture in a war-torn region

The historic cities in the region are under threat from globalization, modernization and neglect, Kazimee said. With so many years of war, there has been no investment in infrastructure. At the same time, the population of the cities has increased dramatically with addition of the poorest migrants to squatter settlements.
“That puts further pressure on the cities and makes it worse,” he said.
As much as 30 percent of Kabul’s historic city has been destroyed in the enduring conflict.

Preserving the living tradition in the built environment is critical, he said, in order to give people their unique regional identity and provide expression of their cultural values. Traditional buildings are conducive to the Islamic lifestyle and fit with their belief systems.
“The living architecture reflects culture and social meaning,” Kazimee said. “It’s critical to preserve this architecture and provide a sense of authenticity.”

At the same time, the cities accommodate much of the population and provide livelihoods for the people. Preserving the heritage and historical qualities of the region can help rebuild the region’s economy because these qualities are attractive and authentic to anyone – Islamic or not.

“It’s a very good commodity to offer the global community,” he said.

Kazimee hopes his book, published by Wessex Institute of Technology in the United Kingdom, will provide a critical roadmap at a time of urgent transformation and speedy development in the region. Although the problem is enormous for the still-fledgling Afghan government, Kazimee remains hopeful.

“It’s important to take the right direction,” he said.

Kazimee remembers living in typical Afghan housing as a youngster. He has happy memories of the courtyards and the extended family and relatives. Like him, his ancestors lived for thousands of years in these very traditional communities.
When he returned, he connected immediately back to his home – the soil, the smell, the light. With the book, Kazimee hopes to preserve this connection for future generations.