Iris Bombelyn grows and leads teams to deliver results. She’s been successful in profit/loss and production roles, and understands the synergy necessary to optimize an enterprise. She is a passionate believer and practitioner of mentoring and diversity inclusion, recognized numerous times for her leadership in STEM. She has acted as a change agent for organizations needing course correction or revitalization to a new strategic vision.

Bombelyn retired from Lockheed Martin after 33 years working in space launch vehicles and spacecraft. Currently she Chairs the Advisory Board of The Harold Frank Engineering Entrepreneurship Institute, and is a Managing Director with Golden Seeds, an Angel Investment group.

Bombelyn started her career as an instrumentation engineer working at Vandenberg AFB, CA on the Titan rocket launch team. There, she learned the value of teamwork, practice, and timely decision-making. She certified as lead Instrumentation Engineer and later, Payload Operations Launch Conductor, in her 14 year stint there.

In her mid-career, Bombelyn took on several temporary assignments, traveling to Cape Canaveral, FL to augment the launch team there, as well as San Diego, CA to work on the Atlas production line. She learned Unix as part of the first-ever Graphical User Interface for the Titan launcher, as well as pneumatics and hydraulics as part of the test and Tank Pressurization team on Atlas.

During a 7 year stint with International Launch Services, a joint Russian-American venture to market and integrate Russian launches for commercial satellites, Bombelyn learned Russian and jiu-jitsu. She says that it is difficult, but worthwhile to tell a joke in a foreign language. She travelled extensively to Russia, Kazakhstan, and Europe, first as a Launch Operations Manager, and later as a Program Director.

Bombelyn transitioned to satellite program management when she joined Orbital Sciences Corporation. As a Program Director for a new contract, she able to develop the programmatics from contract signing to first engineering review.

Bombelyn’s sabbatical at the Massachusetts Institute of Technology was a year of personal and professional growth, providing her an invaluable network of friends and colleagues across the globe and across professions that she still maintains. The world-class faculty at MIT provided thought-provoking business, entrepreneurial, and ethical exercises to stretch the cohort.

When not cooking a fine meal, or sipping a fine beverage, you can find Iris on her Peloton, doing her best to work them off. 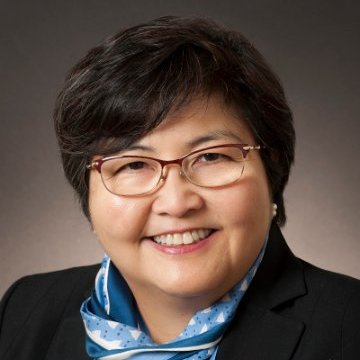