When Heather Faught graduated from Asotin High School in 1994, she never dreamed of being an engineer.

Considering nursing, she began college, but when that didn’t pan out, she got a temporary job as a secretary at Thomas Dean & Hoskins, Inc. (TD & H) Engineering in Lewiston. Who would have thought that 15 years later and with significant help and support from the company, Faught would graduate with a bachelor’s degree in civil engineering?

When she first arrived at TD & H, Faught remembers feeling overwhelmed. Engineering was completely foreign to her. At the same time, she quickly came to enjoy the many learning challenges that she encountered and wanted to learn more. She realized that she liked the creative problem-solving and brainstorming that she often sees the engineers do in the office. She first began considering engineering as a possible career after she was promoted from a secretary to drafter at the company.

“I stumbled into the engineering field by accident and discovered that this is where I want to be,” she says.

She began taking classes on a part-time basis while working full-time at the company. Company managers have been entirely supportive of her education efforts, she says, from paying for tuition and books to letting her have a flexible schedule. While attending WSU as a full-time student for the past two years, she has continued working on a part-time basis in Lewiston. In spite of her challenging schedule, she has thrived in her classes and unexpectedly gained new interests in topics such as environmental engineering and sustainability. Many of her classes were difficult, she says, but she received significant support from her family, her boyfriend, and TD & H when she was struggling, she says. Sometimes the classes where she struggled the most, such as in geotechnical engineering, she later found to be her most interesting.

After graduation, Faught was promoted to engineer at TD & H.

“Heather is one of the most motivated students I have had,” says Cara Poor, clinical assistant professor in the Department of Civil and Environmental Engineering. “She … shows a genuine interest in engineering. This is likely from her experience at TD&H Engineering, where she has seen firsthand how the things she learns here will be applied.”

“She will be a great engineer,” she added. 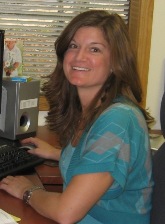