Students Get the Big Picture on Environmental Challenges

Solving the complex environmental problems of the 21st century requires knowing more than just science or just one science discipline.

And, as importantly, all the students are learning about the broader political and policy implications that come out of their science.

Through the prestigious National Science Foundation’s Integrative Graduate Education and Research Training (IGERT), program, a group of Washington State University researchers received $3 million to train approximately 30 new doctoral students over the next five years. The students are studying and conducting research related to nitrogen in the environment while also receiving training in policy studies as part of their doctoral training.

Nitrogen plays an important role in a number of current environmental topics, including climate change, air and water quality and ecosystem health, says Brian Lamb, primary investigator on the grant and Regents Professor in theDepartment of Civil and Environmental Engineering. Although the issue of nitrogen cycle management is not well-known outside scientific circles, it is listed as one of the most critical 21st century ‘grand challenges’ by the National Academy of Engineering. The amount of nitrogen in the environment has risen by an astounding 120 percent in the past 40 years, thanks, largely, to the use of synthetic fertilizers. While fertilizers have increased affluence of societies around the world and fed growing populations, changes to the nitrogen cycle are having dramatic and poorly understood impacts around the world.

As part of the IGERT grant, the first five IGERT students along with seven other graduate students are taking a new course, Nitrogen Cycling in the Environment. In the course, designed to give a baseline understanding of nitrogen’s role in the environment, the students have learned about the important biological and physical processes that occur and how they are all linked together in the nitrogen cycle. Taught by faculty from three colleges, the wide-ranging lectures have attracted many faculty members in addition to the students.

“The faculty has really bought into this, and we have all really learned a lot,” says Lamb.

In the second part of the program in a unique Policy Studio course, the science and engineering students are immersed for a semester in the basics of policy and government regulations as well as more specific environmental policies related to nitrogen, such as the Clean Air Act and the Clean Water Act. As part of the studio course, the students work with faculty from political science to map out the policy aspects of their research topic. As they write their dissertation, one chapter is required to relate to the policy implications of their research.

“It’s pretty unique,” says Lamb. “There are a small number of programs that include policy issues, but this is the only one focused on nitrogen issues.”

A number of policy issues swirl around the nitrogen cycle, such as the regulation of nitrates that may cause pollution in groundwater or emissions of nitrous oxide, a potent greenhouse gas that contributes to climate change.

“Everywhere you turn, there are calls for scientists to be better communicators, to take a more active role, and to have more involvement in policy,” he added.

This spring, students participating in the course are traveling to Washington DC, where they are meeting with congressional staffers and staff at regulatory agencies. In addition to receiving a primer on policy issues, the visit also sets the groundwork for future internships. IGERT students are required to participate in internships and may end up working in a national lab or for a regulatory agency, such as the EPA.

“These agencies really need help. The students will not just be doing busy work,” says Lamb. “Our expectation is that these students won’t necessarily become policy experts, but that they will be better scientists and engineers who have an understanding of policy and its importance.” 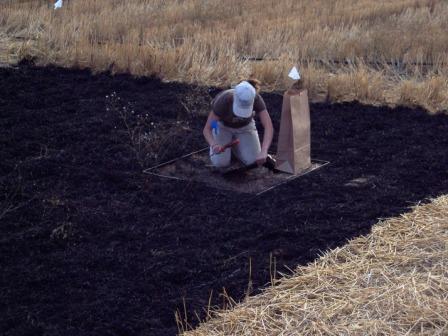 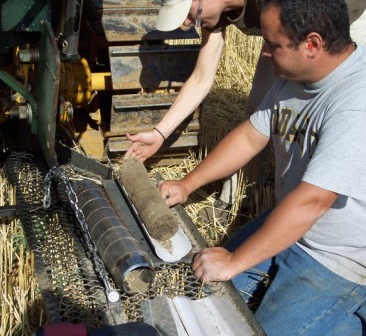 David Uberuaga taking a soil core for carbon, nitrogen, and sulfur analysis, which will later be used for incubation testing for carbon mineralization