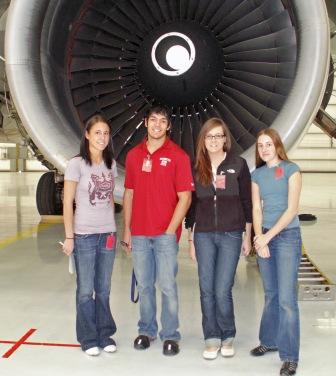 How exactly does one recycle the inside of an airplane? That was the problem presented to a group of WSU engineering and business students participating in Washington State University’s Boeing Scholars program as part of their senior design project.

Along the way to solving it, the students learned valuable lessons outside the classroom, grew in confidence, and gained a glimpse into the professional world that they will soon enter. The students recently won the “Best Green Idea” award in WSU’s annual business plan competition.

“I found myself supplementing classroom lectures with input from the Boeing Scholars Program,” said Daniel Navarro, a junior in business administration. “It was very taxing and the professors demanded a lot out of you, but it was for the best.”

Started in 1999, the Boeing Scholars program provides students needing financial assistance with two-year scholarships. The company also looks for opportunities to provide internships between the students’ junior and senior years. During their senior year, the students from engineering, science, and business participate in an interdisciplinary course in which they collaborate with Boeing scientists and engineers on a project assigned by the company intended to depict real-life problems faced by the aerospace industry. 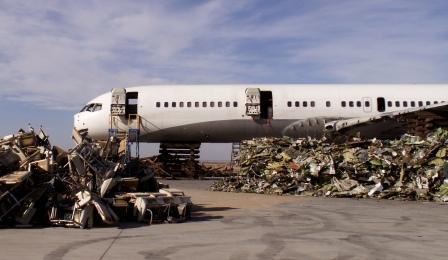 The program was the idea of Scott Carson, a 1972 WSU graduate in product management who is president and chief executive officer of Boeing Commercial Airplanes. When he was approached with the idea of having a scholarship for students in the sciences, he wanted to bring disparate disciplines together in a way that more closely resembles the workplace. The scholarships bring together students from different disciplines and diverse backgrounds and require that they work together on a project.

This year, one of the Boeing Scholars projects asked students to look for a way to create a revenue-generating business that would use the waste materials from airplane interiors at the end of the plane’s lifetime. While there have been significant improvements in aircraft manufacturing, much of the interior plane materials have to be thrown away at the end of the plane’s lifecycle, primarily because flame retardant chemicals make the interiors difficult to recycle. In addition to Navarro, students participating on the recycling project included Michelle Boyer (civil engineering), Anne Zaremba (international business) and Shannon Byler (bioengineering). The students were advised by William Carberry, a program manager at Boeing, as well as WSU faculty in engineering and business.

“The Boeing Company is interested in this project because of their dedication to overseeing the whole life cycle of an aircraft, from manufacturing to destruction,” says Zaremba.

“I wanted to be involved in a project that makes a difference,” said Byler.

As they studied the problem, the students explored a variety of solutions to the recycling problem and settled on working to turn seat material into consumer goods such as handbags. The students also took a trip to California to visit Southern California Aviation, a company that stores, maintains, and reconfigures aircraft.

“The issue of sustainable practices is becoming more prevalent in engineering, and I believe it is something that will be important for me as an engineer in the future to consider,” said Boyer.

As a Boeing Scholar, Boyer participated in a summer internship with Boeing’s facilities group, which provided her with valuable work experience. Her scholarship support meant that she could forego working during the school year and instead focus on her studies, she said.
The students also enjoyed the hands-on experience, which, they say, added to what they have learned in the classroom.

Navarro will do an internship working on the Boeing 787 this summer. As he has interviewed for positions, he has noticed that his experience participating in the interdisciplinary, long term project management has been valued by potential employers.

“At the beginning it was sometimes frustrating because the other business student and I had a different thinking process than our engineer team members,” he said. “Sometimes they would go into detail that was beyond our grasp, and we would do the same from a business standpoint. It took trust for our group members to ‘buy in’ and use our competencies to solve solutions.

“I learned so much about myself after solving problems during times of high pressure and frustration. The experience I received is unlike anything I could learn in a book.”