WSU’s American Institute of Chemical Engineers chapter hosts recruiting and outreach events. Our chapter has helped to create a community between industry and students within the Voiland School of Chemical Engineering and Bioengineering. We hold bi-monthly meetings at which we share pertinent information regarding upcoming events or activities, as well as academic and professional opportunities for the students. Our chapter is focused on the following:

The premise behind Chemical Engineering car is to create a small vehicle (about the size of a shoebox) operated by chemical means that will be able to carry a given load a specific distance and stop at that distance.

Each year at the annual regional conference, the competition is held between schools attempting to go win prize money and the chance to go to the national conference.

WSU’s current chem car is powered by a hydrogen fuel cell and has utilized a magnesium in acid stopping mechanism. WSU’s team won the regional competition in spring of 2013, allowing the chance to go and compete in San Francisco at the AIChE Annual Student Conference.

For the national competition, an Arduino was introduced into the car’s power system, to regulate the amount of power output the vehicle has. With generous donations from BP and the Voiland School of Chemical Engineering and Bioengineering, the team battled it out to take 11th out of 32 teams that competed and is ready to make changes to the car chassis and stopping mechanism for the upcoming regional spring conference. 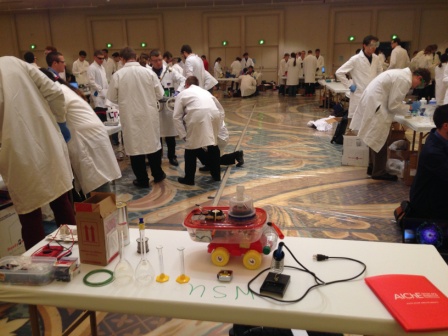