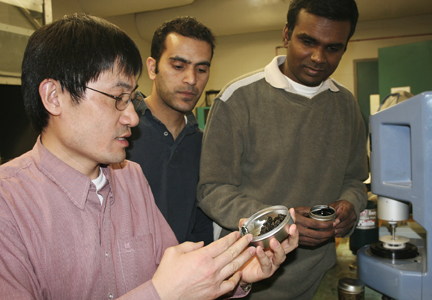 “It’s made from 100 percent waste products,” says Haifang Wen, assistant professor in the Department of Civil and Environmental Engineering.

The researchers have recently received a $150,000 National Science Foundation Small Business Innovation Research grant to develop and test bioasphalt. Working with United Environment and Energy, LLC, a New York-based company that develops environmentally- friendly and energy efficient technologies, the researchers hope to have the new material on roads within the next five years.

The use of traditional, petroleum-based asphalt raises concerns about its contribution to climate change and pollution as well as our continued dependence on foreign oil. In addition, the cost of petroleum-based asphalt has risen dramatically in recent years, so that building one mile of road can cost between $1 and $2 million. And, the material is often in short supply.

Pavement engineering has become one of the largest industries seeking to use recycled materials, including fly ash, rubber from tires, and recycled asphalt and concrete materials in the road. Wen is working to develop and test several products composed of recycled materials, including recycled concrete and fly ash, as an aggregate for asphalt. Wen’s team on the bioasphalt project also includes assistant professor Shihui Shen, graduate student Sushanta Bhusal and two undergraduate students.

Finding a more environmentally-friendly alternative to asphalt, though, is a sticky challenge – literally. Bioasphalt has to flow easily as it’s applied to roadways, but then be hard and tough enough to withstand significant abuse, including truck traffic. It shouldn’t crack during a Minnesota winter or melt during a hot, Texas summer.

How will it act on a road? To find out, the researchers are conducting numerous tests in the laboratory. Using samples that are eight millimeters in diameter and two millimeters thick, the researchers conduct a shear test that is similar to what many of us do with an Oreo cookie. At various temperatures, they squish and then twist it, to find out how much stress it can take. The researchers are testing 10 samples at a time, tweaking the recipes to find the optimal mix. While a few researchers are studying bio-based asphalts, WSU’s group is the only one that is using a bio-based product made from waste cooking oil. In the next few years, the researchers will move up to a bench-scale project and then will create a full-sized test strip.

“This work is not going to sit on the shelf,” says Wen.