Steel Bridge: Hard Work That Pays Off In a Big Way 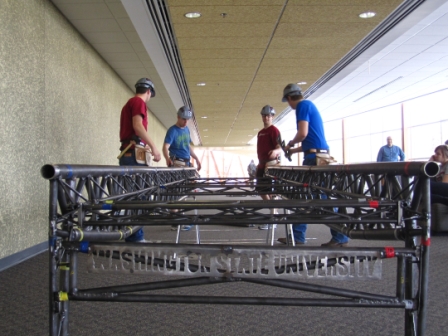 It’s Saturday morning, and Mark Sanders, a senior in civil engineering and captain of the WSU’s ASCE steel bridge team, is up early to head to Bill’s Welding in Pullman.

He won’t leave the shop until late that evening. On Sunday, the schedule will be repeated. It will probably be the same next weekend.

“This is what college should be,” he says, gleefully.

Some students might wonder at spending entire weekends working on such a project.

Sanders says he really loves spending time in the shop and working. The time that he has spent as a member of WSU’s steel bridge team has been some of the most valuable experience that he has gotten in college, he says.

“College isn’t meant to be spent behind a desk – especially if you’re an engineer,” he says.

Sanders grew up on a small hay farm in Freeman, Washington, where he drove a tractor at age 10 and helped his father fix anything that was broken. His father taught him to weld and how to work with wood. That experience parlayed into construction work in high school. He worked construction for a couple of summers before doing a few of his own home remodeling projects for his parents.

He came to WSU after receiving a bachelor’s degree in physics from Whitworth College. After arriving to study for a second degree in engineering, Sanders joined the WSU steel bridge team.

The team, which this year included about 30 regular participants, spends the first half of the year designing their steel bridge. The competition is judged primarily on the bridge’s deflection, weight, and how quickly it can be built. Based on rules and specifications that change for each year’s competition, the students initially spend time on the computer, coming up with three or four different designs and then carefully analyzing them and optimizing each piece. There are lots of spread sheets and structural analysis. Finally, the students come up with a final design that is most efficient to meet required loads.

Then they head into the shop.

Learning how to do the precision work is challenging, says Sanders. Some of the wall thicknesses have to be as small as .028 inches, he says. Take a welding torch to a thin piece of steel, and it will melt instantaneously if you aren’t careful.

“It takes a lot of time and practice,” he says. “The challenge is to get a good weld.”

In his first year at WSU, Sanders learned how to do the careful welding work required for the steel bridge construction. With his training, he then began helping many of the other students to develop their skills. As captain of this year’s team, he also gained experience in the management aspects of a project. “I just walked around a lot with a tape measure,” he said.

Sanders was involved in fundraising, recruiting, and keeping students involved. He learned valuable skills in employee and time management. “How do you take a team and make them experts by the end?” he said. 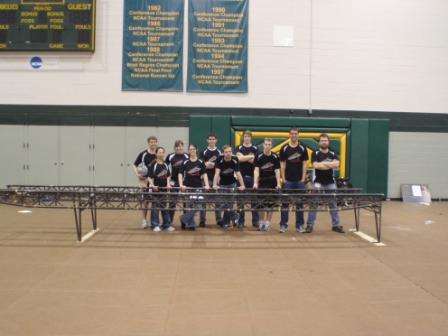 By early April, Sanders’ hours in the metal shop alone totaled 200, and the team had put in 1500 hours. That didn’t include any design time. And, oh yeah – that also didn’t include the students’ regular class work.

“It’s pretty staggering, but that’s what it takes to be successful,” he says.

Still, Sanders says he wouldn’t do it if it wasn’t so much fun.

“I have a blast,” he says. “We’re doing what we need to in order to get the project done. I’m not shy of a little hard work.”

Participating in the Steel Bridge is a rare opportunity to really grasp at learning. “This is what we’ve all been studying for so long,” he says.

The WSU Steel Bridge team took third in the regional competition, held in Anchorage, Alaska in early April. They then went on to take 15th at nationals in College Station, Texas in May. 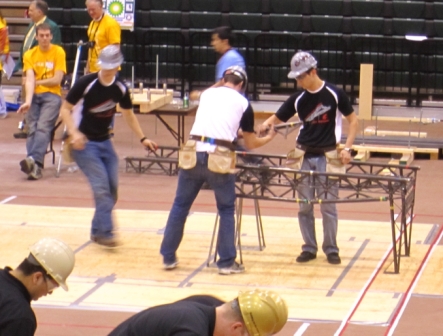 Congratulations to the Steel Bridge Team – 15th in the nation!

The eight members of the Steel Bridge Team returned from College Station, Texas where they competed in the National Steel Bridge Competition held at Texas A&M. Competing against 48 of the best bridges, the team took 15th in the nation!

“We are very excited about our performance at this level and hope to continue our success in years to come,” Mark Sanders said. “We want to thank all of you who have helped us out along the way whether in advise and guidance or design and shop hours. We appreciate all the support and can carry our heads high about our participation in this competition.”

The team logged over 500 hours working on design and analysis, and over 1500 hours in the shop fabricating and constructing the bridge.