How will engineers solve our energy challenges? Fix global climate change? And save the world from environmental devastation?

Perhaps one important key to solving many of these daunting, 21st century challenges may lie in developing new catalytic materials, says Su Ha, assistant professor in the Gene and Linda Voiland School of Chemical Engineering and Bioengineering.

Moving away from the use of fossil fuels is not going to be easy, says Ha. From the plastics used in our everyday lives to most all of our transportation, heating, and cooling needs, we are dependent on petroleum. Because of growing concerns over global climate change and national energy security, a reduction in the use of fossil fuels is imperative Addressing our current energy issues will require short-term and long-term strategies, he says.

“We can’t change infrastructure overnight – we spent 100 years to develop it,” he says. “Rather, we need technologies that allow us to use what we have more efficiently.”

These concerns are greatly affecting future aircraft design and commercial manufacturers such as Boeing, who are working on cleaner, quieter and more fuel-efficient airplanes.

The company has increased the efficiency of its airplanes by 70 percent during the last 50 years, says Joe Breit, associate technical fellow at Boeing. By using more composites and more electric architecture in its most recent model, the 787, the company increased its efficiency by more than 20 percent. The increased use of electrical systems is a trend in several industries, whether automobile or aircraft manufacturing, because electrical systems are more fuel efficient. The company hopes that technology like fuel cells will continue to help increase the efficiency of future airplanes, he said.

Using a novel catalyst and fuel cell system, Ha and his colleagues seek to improve the conversion of transportation fuels (e.g. jet fuel) to electricity.

A concept called the More Electric Aircraft (MEA) can allow greater fuel efficiency by substituting hydraulically and pneumatically driven systems with electrical ones, says Ha. The increased electrical power demand in MEA can be met by decentralizing the power-producing units using small individual devices such as fuel cells. Such distributed electrical power systems can reduce the amount of electrical wiring needed by shortening the distance between the power generator and the power consumer. With the reduction in electrical wiring there is a concomitant reduction in weight, which further increases fuel efficiency.

Furthermore, existing aircraft use a low efficiency gas turbine auxiliary power unit (APU) to provide electrical power for operating lights, navigation systems and various other electrical systems. On an airplane that makes greater use of onboard electrical systems such as the 787, the APU also powers environmental controls, pressurization, wing de-ice, braking systems, and some flight control systems. Replacing the APU on future airplanes with a fuel cell APU means a significant improvement in providing auxiliary power more efficiently when the airplane is on the ground and in reducing the load on the main engines during flight. Thus, fuel cells may become the primary power source for on-board electrical power on all future aircraft, with engine-driven generators used only as backup sources.

Out of several fuel cell technologies developed over the years, a solid oxide fuel cell has the most potential to operate with currently used fuels, such as gasoline, diesel and jet fuels. But, the key to using such fuel cells also depends on the development of new, durable catalysts that reduce costs, says Ha.

Jet fuel is a mixture of very complex hydrocarbon compounds with a significant amount of sulfur compounds. In its conversion to hydrogen, the fuel easily leads to coke or char formations. Thus, the nickel-based catalysts that are currently used are easily poisoned by jet fuel. Ha is working with graduate students, including Oscar Marin Flores, Timothy Turba and Kang Wang, to develop new metal oxide catalysts that can directly and efficiently convert the jet fuel into hydrogen gas without being poisoned by sulfur or carbon deposition.

“Right now, we don’t have a catalyst that can do that,” says Ha.

Ha is cautiously optimistic that with research support the company can have a solid oxide fuel system for planes in the next couple of years.

While he is working on short-term solutions to the energy challenge, Ha also keeps in mind the long-term strategies that will be required. In particular, he says, society is going to need to convert its long-term fuel systems from a petroleum to biomass- based system.

“We have a lot of unused biomass and biomass waste,” he says.

Like crude oil, bio-oils derived from biomass are made of carbon and hydrogen. The problem is that they also contain a lot of oxygen. The key, again, he says, is a good catalyst to selectively convert bio-oil into transportation fuels or other value added products.

Ha hopes to have a solution that will work for jet fuel in the next few years.
In the meantime, he says, the energy challenge remains, and conservation is the best immediate solution while researchers continue to work in the lab.

“We need a lot of resources to spark innovation for addressing our energy issues, but it won’t happen immediately,” he says. “We need to change our lifestyle to conserve our energy, even a little bit. This is the right time to start.”

Meanwhile, Breit says Boeing benefits from its relationship with research universities, including WSU and the University of Washington.

“The universities are very good at basic research,” he says. “We can utilize the capability that WSU has, and it makes a lot of sense for us to do that. Working with WSU helps Boeing make a better product.” 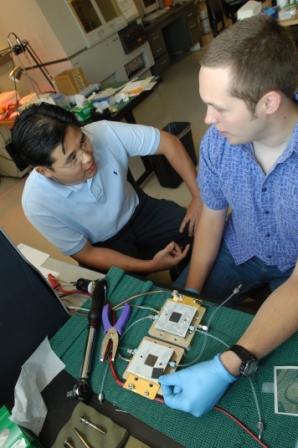