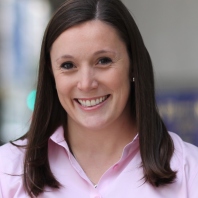 Washington State University alumnus Courtney Davis was named the 2014 Young Engineer of the Year by the Puget Sound Engineering Council.

What started 16 years ago as a simple fascination with bridges led Davis to a fast-paced, service-oriented career in civil engineering. The American Society of Civil Engineers nominated Davis for this award in recognition of her development as an engineer and the outreach she does as a member of the society.

Davis, who is currently working as a structural engineer for KPFF Consulting Engineers, received her bachelor’s degree in civil engineering in 2007 and a master’s the following year, which is where her recognition as a stand-out engineer began.

For her thesis, Davis studied the performance of seven different masonry design codes and suggested changes that were implemented in the 2011 Masonry Building Code. The work earned her the best master’s thesis award from The Masonry Society.

In addition to the civil engineering skills Davis gained at WSU, she also recognizes her ability to bring people together as part of her early career success and attributes WSU’s “team player” atmosphere with fostering that skill.

“Receiving this award…has caused me to reflect on how great of a decision it was to go WSU,” Davis said. “Finding out about the award was exciting, but I was almost more touched by how many professors reached out to congratulate me.”

From WSU Davis went on to work on some impressive projects—from helping design hurricane flood prevention in New Orleans to working on what will soon be the world’s longest cable ferry.

The PSEC is comprised of Puget Sound chapters of national and international engineering and science societies.