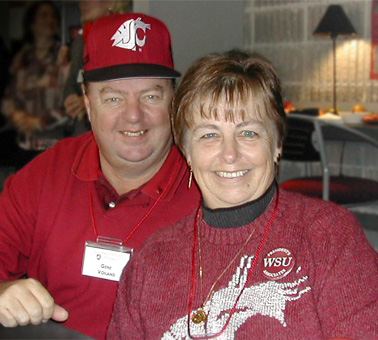 Giving Back in Return for What Was Given

Honoring the lifetime contributions of Gene and Linda Voiland to the college, the university, and society, Washington State University’s Board of Regents renamed the college the Voiland College of Engineering and Architecture.

Gene Voiland has a lot of fond memories from his years at Washington State University.

But a certain series of assignments in Professor George Austin’s class to write a weekly report on two magazine articles is not one of them.

“I hated every minute of it,” says Voiland.

Voiland put in minimal effort to complete the dreaded assignments, but he wasn’t worried—he had aced his exams and figured he was a shoe-in for an A. So getting a B for the course was an unpleasant surprise.

When he asked his favorite professor about the grade, Austin provided a valuable life lesson that Voiland has never forgotten.

“It wasn’t enough to meet the requirements,” he was told. “You need to work at your capacity.”

It was one of many life lessons that Voiland learned at WSU that provided him with the opportunity and foundation to flourish. During his years at WSU, he studied hard while working at several jobs. His professors were supportive and also very demanding; they were sometimes gruff. They taught him the disciplined thinking of an engineer that has strongly affected the way he tackles problems ever since.

After his sophomore year, he got a summer job at Shell Oil Company, which turned into his first job after graduation and launched his successful career. He worked for Shell for nearly 30 years in a variety of positions. He met his wife, Linda, a graduate of the University of Houston, at Shell. He later became president and CEO of CalResources LLC and Aera Energy LLC, a subsidiary of Royal Dutch Shell and ExxonMobil. He retired in 2008 and now serves as principal of Voiland Enterprises LLC, is chair of the board of Valley Republic Bank in Bakersfield, California, and continues to be a sought-after consultant to the oil industry.

Voiland has remained grateful for his WSU education, and when their daily lives allowed it, he and Linda wanted an opportunity to give back.

“You give back to whoever or whatever helped you make it through,” says Linda, who is involved with WSU as a loyal, adopted Cougar. “When we saw we could help out other people, it was a natural fit.”

“What I made in my life and the things that I got to do and accomplish were because of the education that I received at WSU,” says Gene Voiland.

The Voilands have been active supporters of WSU and the college for many years. Gene Voiland led the investment committee for the WSU Foundation and is a member of the foundation’s board of governors. He serves on advisory boards for the college as well as for the Voiland School of Chemical Engineering and Bioengineering.

The Gene and Linda Voiland Endowment Fund has provided support for laboratories and for the greatest needs in the Voiland School. They also support a scholarship for chemical engineering students in the Honors College. They helped with the upgrade and renovation of the Unit Operations Laboratory, leading the charge for matching funds, helping to get the effort organized, and making it a success.

In 2008, the couple made a $17.5 million commitment to transform the Voiland School of Chemical Engineering and Bioengineering into one of the nation’s best programs and to attract top faculty. The school has since focused its program in the area of catalysis and has hired two top researchers in the field, Yong Wang and Norbert Kruse.

Gene Voiland says he came from family of modest means and appreciates the opportunities he was given that led to his success.

“I’m going to try to provide those opportunities for students who are in the same spot,” he says. “I hope through our support that others can achieve similar success.”

The couple has always viewed their support as an investment as much as a gift. They give because they like to see the returns that come back to others and the way in which society is improved.

“We were fortunate because of the investments that other people made in us, and we’re going to do the same thing,” says Gene Voiland.

“Anytime there was been a need, the Voilands rose up and made it happen,” said Jim Petersen, director of the Voiland School of Chemical Engineering and Bioengineering. “Throughout their years of providing support, they have set a tone of excellence, which people tend to rise to meet,” he added.

“The College of Engineering and Architecture has benefited for many years from Gene and Linda’s wisdom, incomparable philanthropy, candor, and passion for Washington State University,” said Candis Claiborn, dean of the college. “Their support for the Voiland School of Chemical Engineering and Bioengineering has resulted in a dramatic increase in reputation, research, and enrollment.”

“The Voilands have enjoyed tremendous success and have so generously provided the opportunities for others at WSU that they once received,” said President Elson S. Floyd. “With the reputation for excellence behind the Voiland name, the Voiland College of Engineering and Architecture aspires to provide the same support and high expectations to allow all students to truly reach their potential, succeed in their aspirations, and create a positive impact on society.

“We’re so pleased to honor them and to celebrate this important event.”