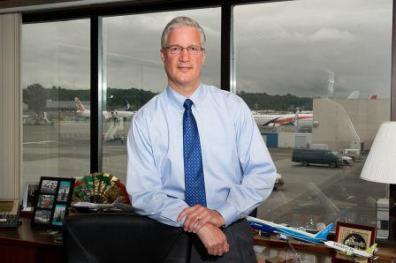 In his Seattle office at Boeing field, John Pricco (’81 BS ME) has a birds-eye view of Boeing operations as a brand new, freshly-painted plane taxis to the runway.

Pricco, vice president of 737 Field Operations and Delivery for the Boeing Company, has recently closed on the sale with the plane’s owners and had a final walk-through this morning. In his office, his radio crackles to confirm that another Boeing plane will be in operation across the world.

Seconds later, the plane roars as it picks up speed, lifts off majestically, and banks westward.

As a youth growing up in Seattle, Pricco saw firsthand some of Boeing’s struggles during an economic downturn in the 1970s. He planned specifically not to be an engineer and not to work at Boeing.

He came to WSU in the fall of 1977 with solid math skills, a technical bent, and the intention of becoming a math teacher. His friends convinced him that it would be more practical to study engineering.

While he received good technical skills at WSU, he said that the most valuable aspect of his education was learning to work in teams, a skill that he has used throughout his years at Boeing. Every aspect of engineering and operations involves team work, where thousands of people work together to design and build a single airplane. “We don’t accomplish anything by ourselves,” he says.

At WSU he also learned to think beyond simple engineering and gained a deeper understanding of engineering’s importance in the world. In an engineering finance class, he remembers learning about how engineering fits into the financial and production processes.

“They did a good job of helping us to see our role in the big picture and where we fit,” he said.

It was during his college years that he first interned at Boeing and fell in love with aviation. Now, most days, he happily spends 11 or 12 hours at the office.

“It’s the mystery of flight and that we are able to put together millions of parts, test them, and then they fly every time,” he says. “It’s such a complex supply structure, organization, and product. Yet we bring it all together.”

He vividly remembers the first time he walked onto the vast 747 factory floor in Everett.

“I was awed by the enormity,” he says. “I never get tired of walking in and seeing the planes. It still sends chills down my back.”

After graduation, Pricco started out in Everett’s 747 plant, where he worked as a factory liaison engineer, provide engineering support. He moved into management in the late 1980s, and was part of the original design team for the interior of the Boeing 777. He later went on to become chief engineer for the company’s aircraft interiors. During Pricco’s time at Boeing, the company has made significant improvements in airplane safety and performance, keeping Boeing products leading the industry.

Later, Pricco moved into additional management positions, including chief project engineer for the Boeing 777 and vice president of engineering for the 747, 767, and 777.

In his current position, Pricco works with Boeing customers daily. After the 737s are built in the Boeing Renton plant at a rate of about two per day, they are rolled to Renton Field for ground tests and then are flown to Boeing Field, where Pricco oversees delivery to customers. He is on the flight line and works with the airplanes every day. He oversees the final paint job for the planes, handles customer inspections, and the final closings.

Pricco says he never imagined his career would be so successful. He has worked with colleagues and built relationships around the world.

“I’ve had tremendous opportunities at Boeing,” he says. “It’s been fantastic. Every day I look forward to coming to work.”

“The magic of Boeing is the people,” he adds. “People really make it happen.”