“It’s all about the derivative” 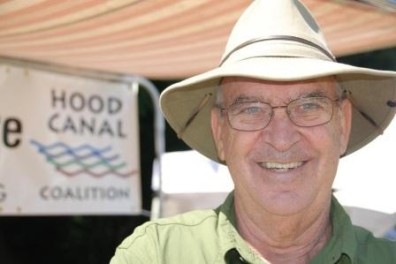 Launching into outer space is scary and even more so when one has a good understanding of physics.

The space shuttle weighs about 4.5 million pounds and reaches a speed of 17,500 mph to get to low earth orbit in a total of 8.5 minutes.

Solid rocket boosters burn for about two minutes, in which time the shuttle hits 3500 mph. The three main engines burn for an additional six and a half minutes.

During that time, astronauts are subjected to a maximum of three G-force.

“It’s all about the derivative,” says Astronaut John Fabian, (’62,BS ME) “When there is a high rate of change, there is an increased likelihood of hazard.”

Those who go to space have to be smart, not risk averse, and lucky.

“There are people who are risk crazy, and astronauts are never part of that,” says Fabian. “They want to minimize the risk and have no surprises. They will manage risk and determine what part they’re willing to accept.”

WSU was a keystone

Fabian, who grew up in Pullman, first became interested in flying as a high school student. He started learning about supersonic jets, which had just surpassed speeds of 1000 miles per hour for the first time. “It was the beginning of the supersonic age, and, it just grabbed me,” he says.

With an interest in the aerospace field, he entered WSU’s mechanical engineering program in 1957. He received a scholarship, but he still worked three jobs to put himself through school. The challenge of supporting himself made it difficult to maintain top grades during those years, he remembers, and, unlike today, the education that he received was not exactly intended to inspire.

Instead, he had solid courses in thermodynamics, fluid mechanics, and structures.

“There was a lot of meat,” says Fabian. “It was not just science but the application of science, and they set a high standard.”

He remembers favorite professors like Jack Smetana and Jack Kimbrell, as well as Eugene Pare, who was one of a kind and a master at the blackboard.

“The keystone for my career happened at WSU,” he adds. “I am extremely grateful to WSU, which helped me develop as an individual and as a professional.”

Becoming an astronaut: 17,000 applicants for 35 positions

After college, Fabian entered the Air Force, where he became a pilot in 1966. He served two tours as a pilot in Southeast Asia from 1966-1971, flying 96 combat missions. With support of the Air Force, he went on to study aerospace engineering and aeronautics, first at the Air Force Institute of Technology and then at the University of Washington, where he received a doctorate in 1974.

He was teaching at the Air Force Academy when NASA recruited the first class of astronauts for the Space Shuttle program. A total of 17,000 people applied for just 35 positions.

“It was the kind of thing you just had to apply for,” says Fabian. “It was impossible to ignore.”

Becoming an astronaut requires a good understanding of physics and a technical background. Flying in space is only 10 percent of the job, says Fabian. Ninety percent are things like systems and procedures development. Fabian served on two NASA missions, logging more than 300 hours in space on the Challenger in 1983 and Discovery in 1985.

He flew on his first flight with Sally Ride, the first American woman to fly in space. It was a complex mission, in which Fabian was the first person ever to deploy and retrieve a free-flying satellite. With Ride on board, the flight rightfully received a lot of media attention.

A new perspective above the earth

Flying in space changes everyone who has had the opportunity to do it.

“It’s an amazing view and an extraordinarily rare opportunity,” says Fabian. “You can learn an awful lot by looking out of the window at the earth. It is just one planet. We don’t see 200 countries, only one planet that we all share.”

Fabian says he doesn’t know anyone who has traveled to space who doesn’t have a different view of the planet when they return. He is involved in the Association of Space Explorers, which is made up of former pilots and engineers who have been to space. Fully one quarter of every meeting of the group is devoted to environmental stewardship. In his own life, Fabian helped to form the Hood Canal Coalition, an environmental watchdog group. He has been involved in a ten-year effort to stop the construction of an industrial port on the Eastern slope of the Olympic Mountains near his home on Hood Canal.

Visiting the WSU campus earlier this spring, Fabian said it’s refreshing to see the changes happening in the Voiland College of Engineering and Architecture. Unlike his early engineering education, he is excited to see the sense of innovation and inspiration in the introductory engineering class, Engineering 120. The college is increasing its enrollment and working to recruit and retain more women and students from underrepresented groups.

“I think we’re on a good path,” he says. “Increasing the output of engineering graduates is vitally important.”

And, he is optimistic about efforts to inspire more young women to pursue the engineering.

“It’s long past the time when we can be leaving out half of the population,” he says.

For nearly 20 years, the Fabians have been providing scholarships to upper class or graduate students in the School of Mechanical and Materials Engineering. He is also working with Dean Claiborn to establish a new engineering scholarship sponsored by the Association of Space Explorers.

“Scholarships encourage, inspire, and facilitate education,” he says. “Sometimes, they make possible what otherwise would not be.”

Fabian hopes that more resources will be devoted to space research and technology and to NASA’s space programs. The costs of new technologies are high, and as a nation, we have to make a choice about devoting our resources on work that positively impacts our society.

“NASA can’t create a future with view graph engineering, we have to build things,” he says. “NASA currently receives less than one half of one percent of the federal budget. If we can’t devote one percent of our expenditures for the future, we may not have one.”