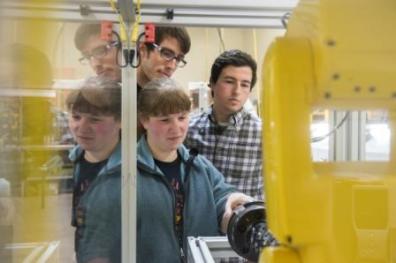 Krista Edwards gingerly works the controls of a robot as Kurt Hutchinson, an instructor in the School of Mechanical and Materials Engineering, looks on.

As part of her senior design project and as a Boeing scholar, Edwards is part of a Washington State University team working to teach the robot a complex maneuver to remove and replace a sharp milling insert. The project is part of an effort by the Boeing Company to automate the insert replacement process.

The Boeing scholars program provides students with two-year scholarships as well as internship opportunities between their junior and senior years. During their senior year, students from engineering, science and business participate in an interdisciplinary course, collaborating with Boeing scientists and engineers on a real-life aerospace industry project. The program brings disparate groups together, simulating the engineering work environment.

Since the program’s inception, students have worked on many projects for the company, including developing a paint contaminant detection system, looking at ways to recycle carbon fibers that are used in building airplanes and preventing interference in wireless networks on planes. The program was the brainchild of WSU alumnus Scott Carson, who retired as commercial airplanes president and CEO of Boeing in 2009.

This year’s students are working in two groups. One group is automating the labor-intensive work of replacing inserts. The other group is developing a computer model to measure wing skin contours. The two groups, which total nine students, have met with their Boeing mentors as their projects have progressed and will make presentations to company officials in May.

For Edwards and her fellow students – including Gage Pepin, David Wyrick, Bryce Poulin and Matt Paauw – the yearlong project has been a valuable experience. The biggest challenge, they said, is learning how to communicate on a big project.

At first, the students didn’t even have a clear understanding of what their project was.

“Communication was the biggest challenge,” said Edwards. “We are also learning manufacturing processes. It was a pretty steep learning curve.”

Since then, they have learned about inserts and manufacturing operations. Each cutting head can only be used for an hour before the inserts need to be changed, and thousands of inserts are replaced daily by hand. The process is physically wearing and can be hazardous because of the sharp edges for cutting.

The project has offered the students a unique opportunity to work together in an interdisciplinary way, mixing students and skills from a variety of disciplines.

“This is doing work that we’re normally not exposed to,” said Pepin.

The students are working to develop a computer program that will tell a robot how to do the complex maneuvering to change the insert.

Robot a first for education

The students are using a FANUC Robotics robot that WSU acquired earlier this year with state support. FANUC produces 70 percent of the industrial robots sold in the U.S.

The state legislature appropriated $1.82 million to upgrade lab equipment as part of an effort to better train and increase the number of engineers in the state.

In addition to the robot, lab upgrades include a new data acquisition system, laser scanners and a 3D printer.

In addition to being used by the Boeing scholars, the robot has been introduced into the curriculum of Engineering 311, the manufacturing processes class. Such robots make up 70 percent of the robots used in industry in the U.S., said Hutchinson, and WSU is the first university in the West that has acquired the robot for educational purposes.

As a safety measure, the WSU robot runs at one sixth the speed of those used in a manufacturing facility.

“This new equipment is going to give our engineering students a lot more hands-on access to the equipment that is typically found in industry,” said Hutchinson.

“This is a really challenging project that they’ve given these students,” he added. “These are geometrically complex parts, and these guys have to learn how to program industrial robots to do work normally done by a human.”

The students will make their final presentation to Boeing on May 7.