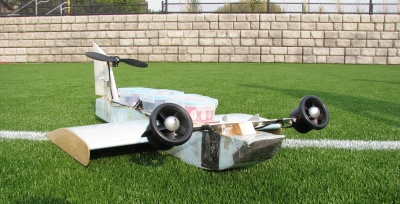 Researchers have been developing ultrafast boats that can literally fly over flat surfaces, like water or snow, exceeding speeds of 100 mph while transporting significant amounts of cargo more efficiently and with less environmental impact.

A group of Washington State University researchers led by Konstantin Matveev, associate professor in the School of Mechanical and Materials Engineering, has modeled the behavior of such a boat as it moves up and down over a water surface. His work, published in the Journal of Fluids and Structures, will help researchers someday make the flying ships a reality.

The novel marine craft, called a Power Augmented Ram Vehicle (PARV), flies close to the surface, trapping air that lies underneath the boat and above the water surface. The stagnated air results in higher pressure on the lower side of the wing, creating more lift and less drag. That, in turn, makes the vehicle more efficient than a high-flying airplane or a high-speed ocean-going ship. The amphibious vehicles could serve in rescue operations or for military transport, carrying heavy payloads like trucks, tanks, or heavy construction equipment at speeds above100 mph both on the ocean and on flat land surfaces.

Matveev has developed small, remote controlled models that he tests in Martin Stadium in Pullman or on the Snake River. The flying ships are different from hydrofoils in that hydrofoils have “wings” under the water with struts to support the boat, which is above the surface. The hydrofoil design limits their speeds to a physical limit of about 60 mph.

While PARV models have been built, the biggest concern with them is safety, says Matveev. Flying just ten feet off the surface at a high speed means that the pilots literally don’t have room for error. Researchers and engineers need to develop better control systems and regulation mechanisms to assure safety.

In his paper, Matveev’s group developed methods to calculate dynamics of the ships so they can be designed and built with confidence. In particular, the researchers modeled such a boat as it oscillates over the water surface. The researchers hope that their modeling will help address the critical challenge of flying the vehicles over waves.

“If the idea was proven and was adopted wide scale, it would be a drastic increase in performance and a revolution in near-coast and Arctic transportation,” he says.

The idea requires simple technology — no exotic machines or technology. The complications come from the geometry and the physics of flow, he added. For ocean-going ships, the idea is further complicated because of large waves that such a ship would encounter.

“The idea is straightforward. The implementation is difficult,” he says.

Matveev is funded by a three-year, $258,000 National Science Foundation grant. Eventually, he hopes to build manned prototypes of PARV.