(And They Still Do) 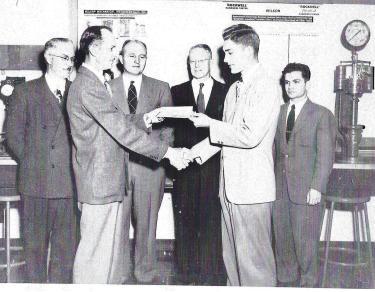 Ronald Nelson (’51 Metallurgy) received a scholarship check that made the difference in helping him finish his engineering degree. The scholarship check, which he received from Professor J.P. Spielman, provided support for tuition, books, and a major part of living expense for a semester.

After graduating, Nelson continued his studies in metallurgical engineering and materials science at the University of Washington and Stanford University. Nelson went on to pursue a career that included research, consulting, technology development, management, nuclear intelligence, and assisting with the publication of a national policy on fissile-materials disposition and nonproliferation. In the nuclear field, he worked in nuclear weapons materials, nuclear waste materials management, and nuclear processing technologies, particularly in the area of uranium and plutonium research, development, and fabrication. He worked with the military, U.S. State Department, International Atomic Energy Agency (IAEA), White House Office of Science and Technology, Department of Defense, and Central Intelligence Agency. He served as division director of two divisions for the Department of Energy, in nonproliferation and nuclear weapons materials. He published more than 30 papers and received two patents.

He returned to Pullman on March 21 to give a guest lecture on the facts and myths of plutonium.

If you want to make a difference in a student’s life, contact Devon Anderson, Senior Director of Development, at danders@wsu.edu or 509-335-2197.