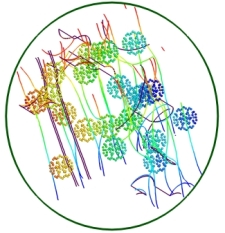 A group of School of Mechanical and Materials Engineering researchers has received support for an international project to improve lightweight metals for use in the transportation industry.

Working with researchers in Qatar and through Texas A&M University, the researchers, including Hussein Zbib and David Field, professors in the WSU School of Mechanical and Materials Engineering, have received support from that nation’s national research foundation to better understand and improve the behavior of high strength steel and magnesium.

Their first project involved improving magnesium alloys for automotive applications. Magnesium is very lightweight, strong, and less dense than other metals, such as steel and aluminum. It is also the world’s fourth most abundant element. Magnesium alloys are commonly used in the manufacturing of cell phones, laptops, cameras, and other electronic components. Increasing its use in automotive applications could reduce the weight of cars by as much 37 percent, dramatically increasingly their fuel efficiency, says Zbib.

While magnesium is used in some automotive parts, however, it has significant problems with corrosion. It is brittle and can crack easily.

The researchers, including Zbib, Field, and doctoral students Hesam Askari and John Young from WSU, and Ghassan Kridli, Georges Ayoub, and Ana Rodriguez from Texas A&M-Qatar, focused on expanding the use of magnesium for eventual use in auto body parts, such as the chassis. By manipulating the microstructure of the material, they worked to increase the ability of the material to be formed into complex shapes. In particular, the researchers looked at the material’s characterization, processing, and forming.

“This work will have significant applications in the auto industry in the next decade,” says Zbib.

In a separate project, Zbib received support to do research in advanced high strength steel. As a building material, steel’s important properties include its strength and ductility, or how much it can stretch before it breaks. Unfortunately, the two properties work against each other, so that as a steel alloy gets stronger, its ductility decreases. Zbib’s group is increasing both the strength and ductility of steel by manipulating the material’s microstructure through thermo-mechanical processes.

Zbib is also using multiscale modeling to better understand the impacts of microstructure changes at the macro-scale, which could lead to better steel design.

Engineering increasingly requires understanding of materials from the nano- to macro-scale. Researchers have to be able to look at the atomic level of materials and know how materials behave in a full-scale dam or airplane. With the help of multiscale modeling to predict materials’ behavior, researchers and manufacturers can design a material, rather than using a traditional trial and error approach.

“We are working to take our understanding of the mechanical properties at the atomic level to help us understand and design for the macro-scale,” says Zbib.