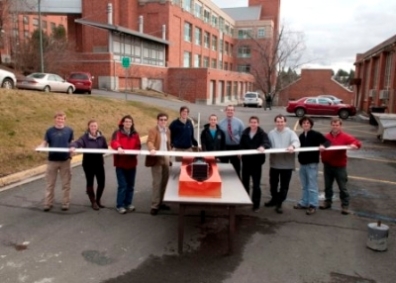 A group of WSU students is building the first airplane fueled by liquid hydrogen at a university. Researchers are developing such vehicles with the goal of flying them at extremely high altitudes for days at a time.

Hydrogen-powered unmanned aerial vehicles (UAVs) are of significant interest because unlike satellites, they can return to earth and be re-used, says Jacob Leachman, assistant professor in the School of Mechanical and Materials Engineering who is leading the student project. A hydrogen-powered craft is also more environmentally friendly than those depending on fossil fuels, with the only waste product being water. The planes also can stay aloft much longer than gasoline powered vehicles—up to 14 days without needing to refuel. Such unmanned vehicles have numerous applications, ranging from weather monitoring to forestry and military applications.

Working on the project since last June, the students have begun building a prototype. The plane, made of Styrofoam with a carbon fiber wing spar, will weigh about 30 pounds with a 22-foot wingspan.

Leachman wanted to give students a valuable, hands-on experience in developing a cutting-edge technology.

“It’s a really exciting industry, and it is projected to double in size in the next decade,” he says.

With financial support from alumni gifts, the group of mechanical and electrical engineering students is first developing a battery-powered plane. They will then move to using a hydrogen fuel cell that runs on hydrogen gas and then on liquid hydrogen. The idea is similar to a hybrid car, says Leachman, but instead of moving from battery power to gasoline, the plane will move toward being powered by hydrogen.

Leachman conducts research in the storage and preparation of cryogenic fuels, or fuels like hydrogen and natural gas that have to be stored at extremely low temperatures to remain liquids. He has developed a small pressurizer that he thinks might be useful for an unmanned, hydrogen-powered, high altitude plane. NASA designs of the HALE (high-altitude, long endurance) planes currently use a cumbersome 400 pound helium tank that serves to pressurize the hydrogen so that it can be used for fuel. Leachman would like to replace the 400-pound tank with his pressurizer that is a little smaller than a pen. He asked the students to work with him to develop a way to test the idea.

The biggest challenge for the project is thermal energy management—using heat exchangers to heat the hydrogen up from minus 421 degrees Fahrenheit to room temperature.

“It’s an engineering and design problem. There’s no problem with the science, and the engineering is very solvable,” he says.

The project provides the opportunity for WSU to do something that no one else is doing at a university, says Leachman.

“We’re competing for the national championship — and we’re the only ones competing,” he says.

“This is why I’m here — to expand my knowledge and apply what I’m learning and to be part of something that could be huge,” adds Eric Barrow, a senior in mechanical engineering who signed onto the project.

With help from Ryan Brodie, a materials science alumnus and materials process engineer at Pratt & Whitney-Rocketdyne, the researchers recently received major support in the form of equipment from the NASA Marshall Space Flight Center to develop a hydrogen testing laboratory. They are developing the lab in WSU’s Thermal Fluids Research Building. The new laboratory will allow the researchers to conduct hydrogen energy research and experiments in areas such as embrittlement, a process in which hydrogen diffuses into metals and can cause them to become brittle. Embrittlement is a concern in rocketry, fuel tanks, and general hydrogen system design.

“This is a unique experience for a highly motivated team,” says Leachman. “If successful, the accomplishment will be self-evident.”

If you’re interested in supporting the project, please contact Devon Anderson, Senior Director of Development for the Voiland College of Engineering and Architecture, at danders@wsu.edu or 509-335-2197.

Hydrogen Team Takes Second in International Competition – A group of Washington State University students has taken second place in an international hydrogen design competition with an innovative design for a power plant that can produce heat, hydrogen, and electric power from wheat straw.